Wednesday, March 4, 2020 — For some areas of the Midwest, it could be one of the warmest March’s on record. That’s the guidance from COFCO International’s Senior Commodity Meteorologist and Analyst Ryan Oates, who says he expects very warm weather to blanket most of the country east of the Rockies for the remainder of this month.

Oates says this warmer weather will be coupled with above average rainfall for areas of the Plains, Delta, and Midwest, keeping soil moisture levels high and causing headwinds for Delta planting efforts.

“Our initial bias for April is currently a similar pattern,” says Oates. “While warmer temperatures will be very beneficial, excessive moisture could pose risks to planting efforts.”

Oates says flooding is another thing to be aware of as we head toward spring. That’s because risks are elevated for both March and April on the river systems, given the already-high water tables, saturated soil moisture levels, and wet outlook.

COFCO International and GROWMARK formed a supply partnership in 2017 to provide new markets for members and producers, while opening up strategic partnerships around the world. 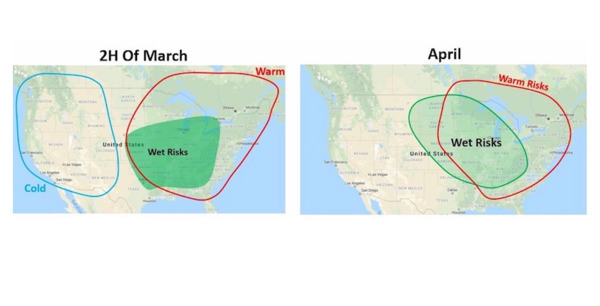